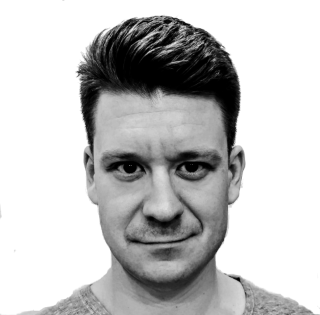 You might have heard recent news about two transgender swimmers - Lia Thomas and Iszac Henig – competing in college-level swimming competitions in the US. Their plans and subsequent results sparked great controversy and raised questions if they should be allowed to compete at all. Let’s investigate their background and scientific rationale for any decision.

Lia Thomas and Iszac Henig are actually two different cases. The former is a biological male and came out as transgender in autumn of 2019. Since then she has been undergoing hormone therapy as part of transitioning to male. The latter is a biological female and – at the moment of writing this article – he claims not the be under any hormonal therapy, except having his breast removed. On 17 February 2022 they both competed in the same swimming competition and both established new records in some of the categories: Iszac's record breaking.Before we analyze this particular case, let’s see how the differences between men and women in professional swimming look like.

Men vs Women in Olympic Swimming

There is a very useful database on the internet that holds historic Olympic results (online database) in all competitions. Swimming is a convenient case as there are no weight categories and the results are measured using just time. The last pre-covid summer Olympics were held in 2016 in Rio de Janeiro, Brazil. It is the safest choice as back then there were no pandemic disruptions.

The categories where both men and women compete were: 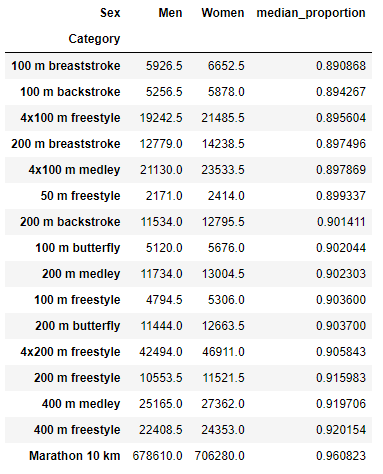 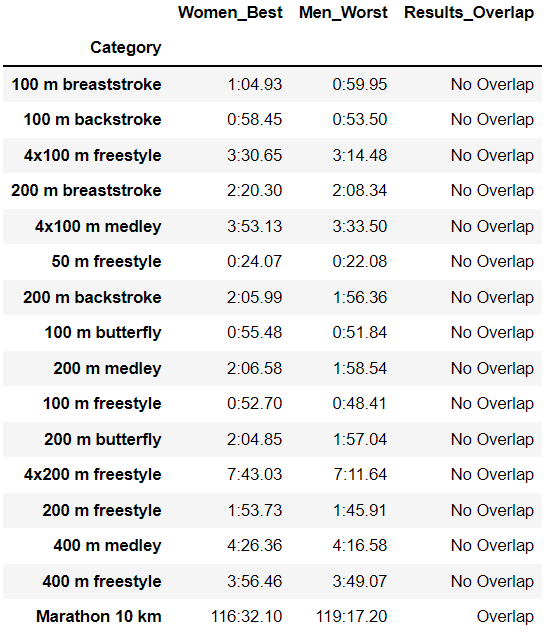 In the above table a comparison between the best time in women (Women_min) and the worst time in men (Men_max) is made. We see that there is only one category where the fastest women can beat the slowest man – the 10 km Marathon. In all other categories there is not even an overlap of the results.

One could argue that maybe professional sport doesn’t necessarily translate to college sport. I couldn’t find any historic results for Lia Thomas (colleage online profile)nor her teammates to compare, but I did find results for Iszac Henig and both men’s (Yale Men's Swimming Roster) and women’s swimming team (Yale Women's Swimming Roster).Iszac’s best time are:

His best results were compared with both men and women in Yale’s team in exactly the same categories. Not all team members have that information on the website, so whatever was available was used. 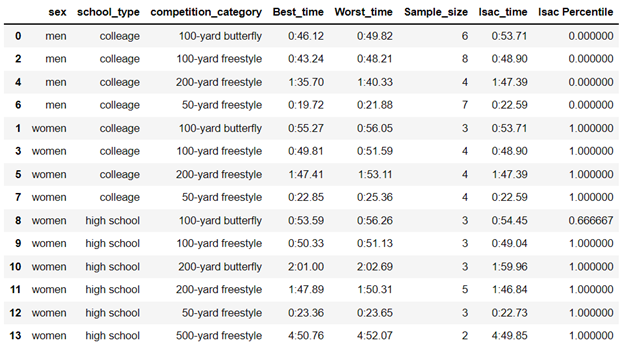 The column “Isac Percentile” shows how his best result stacks up against all other available results in a particular category. We see that in men’s category it’s always zero. This means that Iszac would be the slowest teammate (Isac_time vs max). It’s completely the opposite in the women’s category, where – almost exclusively – his result would rank him number one. The only exception is his high school 100-yard butterfly result, which puts him in the 66.6 percentile, so a little above the median.

This raises the question whether he will ever want to compete in the men’s category as he would need to drastically improve his results. Even with hormonal therapy he would still need to keep his testosterone levels within ranges normal for men, which might not be enough to catch up with biological males. All in all, this demonstrates why traditionally men and women competed in separate categories – not only in swimming. Every contender hopes to win. Even if not this year, then maybe the next one. He or she hopes to improve over time and finally reach that at least the podium. Therefore it is so important to have a level playing field in sports. It means separating men and women, maintaining weight categories within those groups and strict anti-doping checks. Trans women clearly have an advantage over biological women and the gap seems massive. It’s unlikely that the field can truly be leveled in such a case.